You know what I never do, that I should do?  I never write down call numbers for the books I want at the library.  I look them up on the computers and then just hope they stick in my memory long enough for me to find the books I’m after.  I make them into little songs and sing them under my breath as I wend my way through New Nonfiction, Film, and Young Adults back to the regular nonfiction section.  This is fine as long as there are no books with exciting titles in New Nonfiction; as long as I don’t suddenly remember a Film I want to see; and as long as (this is the real peril) I do not make eye contact with the scary cardboard cut-outs of Robert Pattinson and Taylor Lautner that cast dour, dead-eyed stares at you as you walk through Young Adults.  All of these things distract me and make me forget my carefully memorized call numbers.

I got Enlightened Sexism off of the New Nonfiction shelf.  At first I thought it was promoting enlightened sexism (like, one of those books that says, Men’s brains are different to women’s!  They want sex all the time because of evolution!  Accept it!), so I trotted over to investigate and found that, on the contrary, it was condemning this new media thing that posits feminism as having succeeded completely and proceeds, from that basis, to promulgate harmful and sexist images of women.  Interesting, eh?  I had to go look up the call number for Quiverfull again, but it was worth it!

Enlightened Sexism: The Seductive Message that Feminism’s Work Is Done is exactly what I wanted out of Female Chauvinist Pigs.  Douglas casts a critical eye on the gaps between media’s portrayal of women (the powerful, in-control women as well as the blonde bimbos) and the realities for women in American society.  She explores TV shows and films that provide positive (or “positive”) portrayals of powerful women, as well as those that reinforce stereotypes about gender roles.  Her tone is light and conversational, making this a quick, absorbing read, especially if you are like me and enjoy detailed analysis of gender roles in media.  In a particularly interesting chapter, she discusses the paucity of positive, layered portrayals of African American women in media these days.  I liked that one because oh, you just have no idea how much it makes me squirm to see yet another sassy black girl friend on an otherwise all-white TV show.

My only gripe is that Douglas has this unfortunate habit of making ironic use of slang.  “Feminism was, like, so yesterday – hostile to the fun of new girliness and unnecessary because equality had, like, so totally been achieved.”  “The deafening boom-boom dance-floor music was supposed to convey that, dude, we were in a totally cool zone, but I always felt like I was trapped in Godzilla’s left ventricle.”  If those were the only two examples, I would not be griping about it, but she does it a lot.  For a book that is generally very intelligent, it was kind of obnoxious.

Oo.  Did I say “my only gripe” just there?  I meant to say, my only gripe not predicated on my certainty that my perceptions are always correct.  Susan Douglas analyzed a bunch of different films and TV shows, and I feel like she got some of them wrong.  She kept saying they implied things I don’t think they implied.  For example, she said that male sexuality in Buffy is portrayed as a threat to women, and women’s sexual desires are also dangerous.  So not the message of Buffy.  I would argue this point into the ground, but it would be very boring if you don’t watch Buffy, so let me just say: I am right, and Susan Douglas is wrong.  Don’t you hate it when writers make critical but spurious claims about things you love?

This has been for the Women Unbound Challenge.  You should read it too! 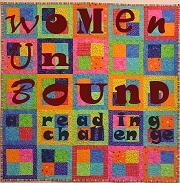 Do you identify as a feminist?  Why or why not?

Rantings of a Bookworm Couch Potato

Tell me if I missed yours!